Light Drives Out the Darkness 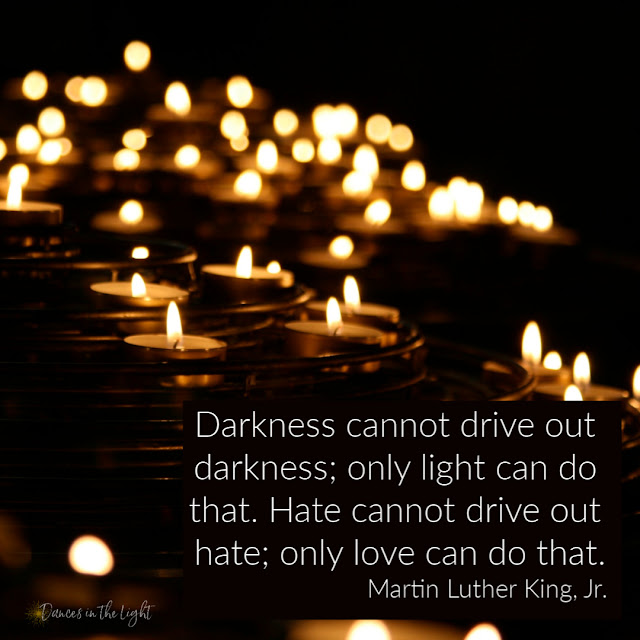 Jesus spoke to the people once more and said, “I am the light of the world. If you follow me, you won’t have to walk in darkness, because you will have the light that leads to life.” John 8:12

I love my country; though, I haven't always been proud of it. Racism is such a dark part part of our history. On this day that we honor Martin Luther King, Jr., I have to pause and think about how I, as one lowly individual, can make a difference.

I grew up in the northern Midwest, so I wasn't aware of segregation, and I was too young to remember much about the Civil Rights movement. And all I know about Martin Luther King, Jr. is what I've read in books and seen on TV and movies, but he has taught me so much about loving others as Jesus does.

I am one of the privileged white, having lived a typical middle class life. I've never been rich and there are times I've had to do without because I couldn't afford what I wanted, but I've never gone to bed hungry and I've always lived where I wanted to (within my means). My parents both held college degrees and they expected me to do the same. I was never told I couldn't do something, other than wanting to wear pants to grade school (yes, I'm that old and went to grade school back when girls had to wear dresses!). The only significant discrimination I've experienced was based on my gender. I tell you all of this so you understand that I can only imagine what it's like to be treated like a second-class person; to be told I couldn't drink from that fountain or go through that door or sit in that seat. And even my imagination will fail, I'm sure, to capture the full impact of that treatment.

The discrimination I've experienced as a woman has made me angry and frustrated at the time, but I quickly found other successes, so it was easy for me to move on. I doubt I would have been able to rise above so quickly if the discrimination was incessant. I think it would be easy for me to become bitter and hate those who mistreated me.

And that's why people like Martin Luther King, Jr. amaze me. He saw the destructive force behind hate between races and he chose to confront it with love. As he said in his book Strength to Love, "love is the only force capable of transforming an enemy into a friend." Notice he didn't say that it transformed enemies into "acquaintances" or "colleagues" or even "tolerated people". Friend is a strong word in this context.

When you think of your friends, you probably come up with a list of people whom you respect, value, and enjoy spending time with. Is it really possible to change a hated enemy into someone you respect and value?

Yes, it is. Through God's redemptive love. That kind of love starts with forgiveness. In order to love our enemies, we must first forgive them. And that's not the "OK, I'll forgive, but I'll never forget" or "I'll forgive, but never have anything to do with you". Nope. It's the "I forgive you because you are a child of God and have failings just like me." It's the "I know you have redeeming qualities and I will fight to find them."

When you can see your enemy as just a person that God loves as much as He loves you, it's easier to accept that their actions are rooted in experiences or how they were raised or even fear. Once you can see them in that light, it's so much easier to find qualities that you respect and value. The power of your love and forgiveness can change that person's attitude toward you and put you on the path of becoming friends.

So, on this day that we honor Martin Luther King, Jr. and that enormous impact he's had on American history, I challenge you to love your enemies until they become your friends. 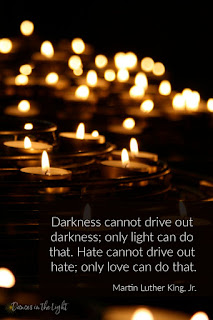