Look at the Heart 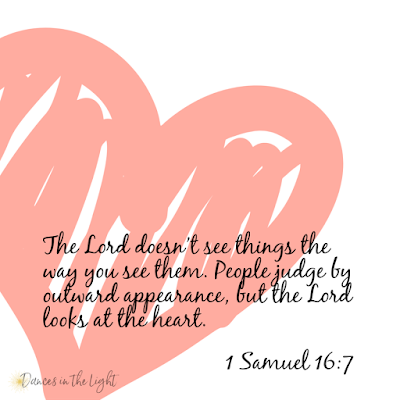 I live in an agricultural area, so it’s not unusual to see people - men, in particular - driving a beat-up old truck, wearing old work clothes and sporting dirt under their fingernails. By looking at them, you’d assume they don’t have two dimes to rub together; but you’d be surprised because many of them have more money in the bank than most of us. And they’re not just rich in money. They are some of the most compassionate and giving people I’ve ever met.

Conversely, when I was in high school, I was in the same English class as the most aloof girl in the school. Her father was the president of a large, prestigious university and the whole family was practically royalty in our little town. Everyone wanted to be her friend, but she didn’t seem to have time for them. And why should she? She was used to meeting the smartest researchers, Olympic-caliber athletes, famous speakers, influential politicians… people the lowly high school kids only dreamed of meeting.


For some reason, she took a liking to me and we became friends. I found out that she was actually a very sweet person. She wasn’t aloof, she was almost painfully shy. But, once she got to know you, she was witty and caring and just a regular teenager. OK, a teenager who rubbed elbows with people I only read about, but she took nothing for granted. She was grateful for all the advantages her dad’s position afforded.

Of course, the moral of the stories is that we shouldn’t use the outsides of people to judge their insides. And yet, we do. Research shows that it takes about 1/10th of a second to form a first impression and that opinion rarely changes with longer exposure. Imagine all of the amazing people we’ll never know because they aren’t attractive enough, or we meet them on a bad day, or they’re just really shy.

I love that because my words don’t always match my intentions and my actions don’t always reflect what’s in my heart. God knows that I am an imperfect person, but He also knows that I want to be faithful to His commandments. Because of His grace, I am forgiven of my imperfections.


A Word with God

Heavenly Father, thank you for your gift of salvation. Thank you for seeing what's in my heart instead of relying on what I say or do. Help me to look past outward appearances and actions to see the real person. Amen.

Have you had a similar experience as mine where you've found that your first impression wasn't correct? I'd love to hear about it and how you overcame that first impression. 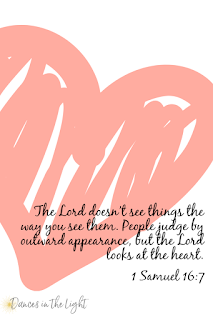 Email ThisBlogThis!Share to TwitterShare to FacebookShare to Pinterest
Labels: Samuel