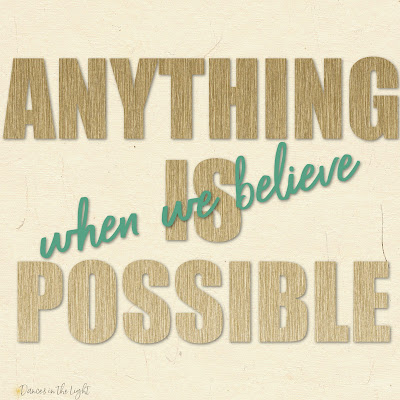 
A father took his son to see Jesus. He'd heard that this prophet could perform healing miracles and his son needed a big miracle. He was disappointed when Jesus wasn't there when he arrived. He was even more disappointed when a few of Jesus' disciples attempted and failed to exorcize the demon that possessed his son. Had the stories he'd heard about the healings been untrue? Certainly, the religious teachers thought so.

The father awkwardly carried his son, trying to keep up with the crowd that ran to Jesus when he returned. He explained his son's affliction and asked Jesus to heal him, if he could. The man so wanted to believe that Jesus could heal the boy, but the disciples had failed so maybe it was beyond the prophet's capabilities as well.

When Jesus said "anything is possible when you believe", hope made the father's heart somersault in his chest. He did believe. The prophet's calm and confident voice made it easy to believe. But he feared that his faith might not be enough to heal his son. He cried out "I do believe, but help me overcome my unbelief!"

Jesus destroyed the demon that had held the boy captive and then helped him to his feet.

Do you ever feel as though your faith isn't strong enough to ask God for the impossible? Jesus said in Matthew 17 that you only need the faith the size of a mustard seed to move mountains. A mustard seed is tiny and so it's a good illustration of how little faith you need.

I think the problem is that, once we have that little bit of faith, we are keenly aware of those doubts that creep into our minds. It makes us feel that we don't have enough faith - we aren't worthy to ask God for anything.

If you still feel your faith is lacking, then ask God to help you with your unbelief. Ask Him to help you grow as a Christian.