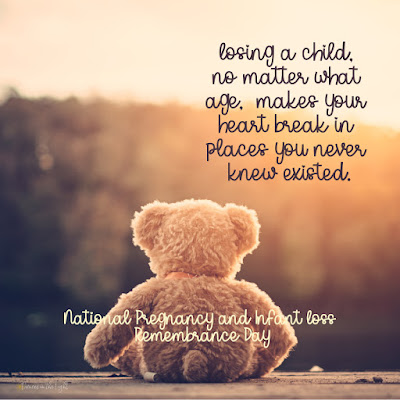 He will wipe every tear from their eyes,
and there will be no more death or sorrow or crying or pain.
All these things are gone forever.
Revelation 21:4


The death of a child is unimaginably difficult. I mean, really unimaginable. And with over 20,000 child deaths each year and over 20% of pregnancies ending in miscarriage, there are a lot of parents who have to experience the unimaginable.

I have experienced that loss three times. First was a miscarriage early in my pregnancy - at about 12 weeks. I'd just found out that I was pregnant and I was already in love with the tiny life growing inside me. I was already dreaming about that child's life and how he or she would fit into our growing family. I was picturing my first daughter was a big sister. And then it was over barely before it began. A boy or girl? I never knew. There was no funeral, no grave to visit. My mother cried with me. My friends didn't know what to say.

Less than a year later, I was pregnant again. I held my breath until the 13th week and then I allowed myself to begin dreaming again. The pregnancy was actually quite uneventful and, by the time the due date came, I was allowing myself to relax. When the labor pains began, I looked forward to meeting this new life that I'd come to know over the past nine months. By the time we got to the hospital, she was already gone. We named her Kimberly.

My friends still didn't know what to say. Even my pastor was at a loss for comforting words, resorting to the trite "you can always have another."

Two years later, Nicole was born six weeks early. Mercifully, we'd been spared the knowledge of her genetic issues while I was pregnant, only learning upon her birth. Abortion would not have been an option and I don't know how I would have managed if I'd known earlier. We spent the next 39 days making the NICU our second home. We pretended that we had all of the time in the world while knowing our time with Nicole would be too short.

I think of those three children very often. Probably every day. And I talk about Kimberly and Nicole often. I remind people that they were - and still are - a part of my life. I use their names and it's music to my ears when others do as well. Of all of the facets of grief, I regret that people outside of my immediate family will forget about these two precious girls that they never met. And so it's important to me to continue to talk about them and to say their names.

Today is National Pregnancy and Infant Loss Remembrance Day. Take a minute to say a prayer for those parents who have had to experience the unimaginable. If you know someone who has experienced the loss of a child, talk about the child. Use his or her name. You will be giving that parent a precious gift.