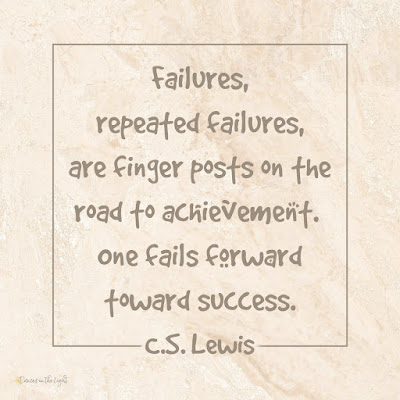 Failures, repeated failures, are finger posts on the road to achievement.
One fails forward toward success.
C.S. Lewis

I am trying to learn Spanish using an app on my phone. It's definitely a challenge for me, especially because the app tries to mimic how you would learn through immersion. When it first introduces a concept or vocabulary, it doesn't give a lot of information about grammar or when you use usted instead of tú, for example. As a result, I make a lot of mistakes and it can get very frustrating.

Sometimes I feel like I'm not learning anything as I repeat the same mistakes again and again. But then, the lightbulb finally comes on and I get it! And, when reviewing what I've learned, I feel a sense of pride in my progress.

Those points of former frustration are like finger posts on my road to achievement. I can look back on them and smile and how far I've come.

So it is with just about everything in life. Most things don't come easily to us and so we are bound to fail at first. That's not cause for quitting or browbeating ourselves. Think about how we react when a baby first stands on its own. The baby is standing on wobbly little legs and will inevitably fall down at first. Do we berate the baby for its failure? Of course not! We applaud and exclaim with glee over the astounding feat.

So it should be with our own failed attempts. Sometimes we just need to practice to learn a new skill (like me trying to roll my r's!) and sometimes we need to try different approaches to gain new knowledge. We learn something new with each attempt. And if we're learning, how can that be a failure?